Two weekends ago I went to visit an old friend. And I mean “old friend” quite literally. Sister Agnes Marie is 102 and she has been in my life since I was seventeen. She now lives in the hospital wing of the Sisters’ retirement home. A mutual friend, another sister who lives closer to her and has overseen her care for many years, had alerted me that she had declined rather markedly in the previous few weeks and we had arranged to visit her together. I knew her care there was excellent. As we walked down the hall, one of her nurses come over to me, grasped my hand and said, “You must be the good friend she’s expecting. She will be so happy.” 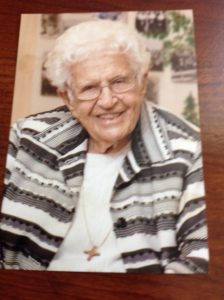 I was not surprised to find her in bed–I had been warned that she was no longer strong enough to get up–but I was surprised to see how much more frail she had become in the months since our last visit. I bent over and took her face between my hands but before I could kiss her, she said, “Oh, we have been friends for a very long time.”

“Yes,” I said, kissing her on both cheeks, “a very long time indeed.” I pulled a chair close to the bed and settled in for a chat.

Her speech was slow and broken. She stammered and sometimes searched for her word, trying out several before she found the right one. Occasionally she stopped and puffed out air as if to relax her lips for speech. This was a woman who had taught school for decades, addressed large audiences and entertained companions with funny stories. She was not giving up speech without a fight.

We covered the usual conversational bases. My husband was well, had sent his love, and was about to celebrate a landmark birthday. She was well taken care of and had received a visit from her god daughter that morning. I named each of my family members and assured her that all were well and happy, as I was myself. I was enjoying my participation in my writers’ seminar. In the middle of such family trivia, she pointed to a bright blue blanket that lay along her length. With many fits and starts, she told me it had been made by Native American artists and the nurse put it there to match her blue eyes.

After a while, Suzanne and I began our own conversation. Suzanne is in management in a large consortium of Catholic hospitals and had a good deal of news to share. We also shared more specific details about our respective families. Sister Agnes Marie interrupted us several times.

“What are you two talking about?” she asked. We started to tell her but such detailed evidence of how the world was didn’t really interest her for long. She interrupted to tell me about some of the other people in the room. “Women with hats,” she said, pointing so a space near the window. Unflummoxed, I responded. “Hats for women are coming back in fashion.” Suzanne muttered, “Yesterday it was a man in a red hat.”

After listening, as I thought, to more of Suzanne’s and my conversation, she picked up the coil of tubing that lay coiled on her stomach. and waved it around, a little like a cheer leader with pompoms, chuckling to herself the while. Then she put it back down and began to trace one finger along her hands and arms. I noticed, probably for the first time, what beautiful fingers she had, long and tapered. I reached over to put my hand next to hers and said, “You are so much older than I, but your fingers are unmarked and untwisted.” She merely smiled up at me. Then she said, with another beautiful smile, “This is probably good-bye.” Caught completely off-guard, I could only smile back.

After that, there could be only anti-climax. More desultory conversation, more talk about the ladies in hats, more waving around of the oxygen tubing. Finally a series of deep sighs suggested that I had stayed long enough.

“Sister Suzanne invited me for lunch,” I said.

I rose, kissed her on both cheeks and she said again, as if it were her standard greeting, “We have been friends for a very long time.”

“Yes,” I responded, “we have shared many years, much love and a few good laughs.”

It had not been a sad visit at all. The whimsy that had always lurked beneath the face of authority, more visible beneath the smiling face she turned on friends, seems to have been freed by the weakness of body and the shakiness of her mind. Even so, I wasn’t as brave as Sister Agnes Marie. I could not say good-bye.

Posted in The World I Live In